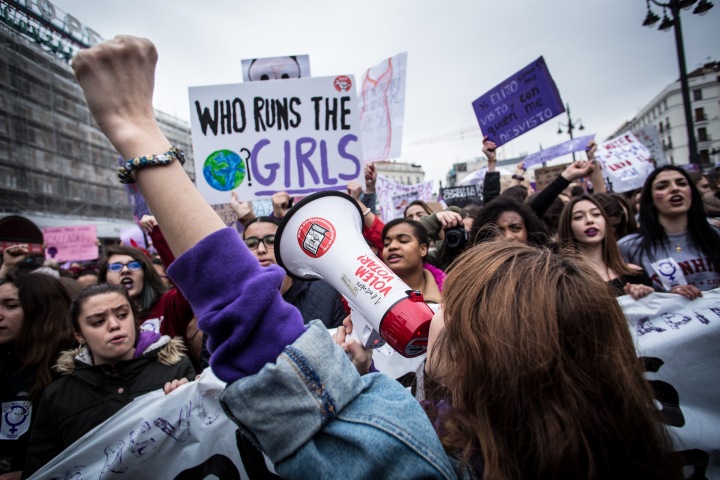 Yesterday was International Women’s Day, a day to celebrate all the wonderful things about being a woman. Everyday, women are doing wonderful things and in Australia, there are some truly inspirational women doing remarkable things, be it championing causes, charity work or just being all round righteous babes, inspiring others to change or fighting the system. Here we take a look at some of the most inspirational women in the country.

Young Australian of the Year Ash Barty has been leading the charge for women in sport since she 16 years old. Firstly as a doubles player in women’s tennis, then in cricket, now back in tennis where she is now at the top of the game with a world ranking of number 1. Now this is an amazing accomplishment for anyone but its Ash’s roles as ambassador and charity work that we really admire. Firstly, she encourages women of all ages to take part in sport, be it tennis or anything else. Sport is dominated by men’s codes and involvement, so to see someone encouraging women is a great thing. Ash is also Indigenous and is National Indigenous Tennis Ambassador for Tennis Australia, encouraging Indigenous to play the sport. On top of this, Ash has done a lot for charities close to heart. Last year, she donated $30,000 to the RSPCA in Queensland which is very admirable. Also, she donated all of her winnings from the Brisbane International tournament to bushfire relief. Seriously impressive!

So Celeste Barber was famous on Instagram long before the bushfires. But afterwards? She became world famous for her Facebook fundraising campaign for the bushfires. She was known for her funny parodies of celebrities’ photos and videos on social media and has performed stand-up around the world, with millions of followers on social media. So when she launched a fundraiser on Facebook to raise $30,000.00 for the NSW RFS, her expectations were exceeded when over 1.3 million people donated over $51 million! Celeste had a personal connection to the bushfires as her mother-in-law was affected by them on the NSW south coast, and it was this personal connection that resonated with her followers. At the moment, Barber and her lawyers are currently figuring out how to distribute the funds amongst all the states, wildlife and bushfire victims as the fundraiser raised so much. On top of this, she hosted the bushfire relief concert, Fire Fight Australia, which raised $9 million. Hats off to Celeste!

Turia’s story is truly inspirational. An engineer and ultra fit athlete, Turia was burned in an out of control grassfire whilst competing in an ultramarathon in the Kimberleys in 2011. She suffered burns to 65% of her body and was not expected to survive. She lost seven of her fingers, spent over six months in hospital, underwent over 200 operations and spent two years in recovery. She was told that she would never walk, run or be independent again. But Turia defied odds and showed how true determination can get you through anything by competing in Ironman competitions in 2016. If this wasn’t inspirational enough, Turia has used her experiences for good, becoming a motivational speaker, a writer publishing 3 books, and as an ambassador for Interplast Australia & New Zealand, has raised over $1 million in donations and $3 million in media awareness through events, speaking, and leading fundraising adventures along the Great Wall of China, the Inca Trail and the Kokoda Track. Her most recent effort, has been to create the initiative Spend With Them, to help support businesses affected by the devastating bushfires. The. instagram page is doing a wonderful job promoting businesses and products that have been suffering. This woman truly is amazing!

We think anyone who advocates for mental health awareness and initiatives is inspirational which is why we are a huge fan of Jessica Rowe. Almost half (45%) of Australians will experience a mental illness in their lifetime which is why this work is so important. Rowe has been prominent in the media from 1996, presenting different news, breakfast and morning shows. Early on, she used this platform to discuss the issue and in 2005, published a book on her experience’s of her mother’s bipolar disorder. Having previously had anxiety and panic attacks, she spiralled in post-natal depression following the birth of her first daughter. Ever since, she has been a tireless advocate for the cause, sharing her experiences including her ongoing treatment with the country. She alongside other women have published a book on motherhood, dealing with the issue of post-natal depression. On top of all this, she’s also ambassador for the national depression initiative beyondblue. For her mental health advocacy, she is a Member of the Order of Australia. We think anyone who advocates for such a worthy cause is inspirational!

Domestic violence has been in the news again, due to the tragic death of Hannah Clarke and her children at the hands of her husband. Sadly, this is not a rare occurrence. On average at least one woman a week is killed by a partner or former partner in Australia. This figure is alarming. Domestic violence takes an even more tragic turn when children are involved like the case of Hannah Clark. This is what happened to Rosie Batty. After an on and off relationship with Greg Anderson that ended shortly after their son, Luke, was born in 2002, Anderson threatened Batty repeatedly leading to a number of arrests, charges and intervention orders. Despite all this, Batty allowed Anderson to maintain a relationship with their son until he threatened them with a knife. He was prohibited from having contact with them until he successfully appealed the order, allowing him contact at public sport matches. A year later, Anderson murdered Luke at cricket practice before being killed by police. The next day, Batty spoke to the media about her experiences, beginning a long campaign for domestic violence victims and survivors, addressing systematic failures, public perceptions on domestic violence, lack of funding and police & legal procedures that failed to protect her son. That year, she created the Luke Batty Foundation to assist women and children affected by domestic violence. In 2015, she was awarded Australian of the Year and was instrumental in establishing the Royal Commission into Family Violence in Victoria. Despite threats and abuse and dealing with her own grief, Batty is stilly tirelessly campaigning against domestic violence. Truly inspirational.

Our final inspirational woman, really needs no introduction. Carrie Bickmore. We all know and love her from The Project and hit radio show, but what we love most about her is dedication to the charity she started, Carrie’s Beanies For Brain Cancer, set up in memory of her late partner, Greg, who died from cancer in 2010. She set up the charity in 2015 after winning the Gold Logie which aims to raise desperately needed funds towards research into the horrible disease that is brain cancer. Of the 1600 people who get diagnosed every year, 1300 die. There is no cure. The only way to increase survival rates is through research which the foundation generously funds. So far, over $11 million has been raised and donated to research, with ongoing fundraisers and beanies for sale. Carrie has tirelessly highlighted this cause across many different platforms and as a result, has been awarded The Medal of The Order of Australia. Amazing Work!

This is only a few inspirational women around the country. There are many more doing great things that are recognized, but everyday women are just as inspirational. The mothers, the women battling cancer and those fighting the patriarchy and climbing the corporate ladder. We salute you. All of you!