I hope this episode helps us understand why Elora gave Eden a rose (spoiler it doesn’t, I still have no idea what is going on with these two). Thomas coming in so late really ruined his time in paradise to build relationships. Hope the flight back to Canada wasn’t too bad.

There are 2 sets of heels walking into paradise today. Sasha, memorable from the moment she decided to eat her rose (can you die from this? Does it taste good? So many unanswered questions that I am not willing to experience). Rachael opens that she is getting ghosted by recent dates, so what is wrong with her, is she another clinger? At least there are still some single guys in paradise for them to hopefully make a match with. Why are people star struck from American Jared? Is he a celebrity? Keira is playing match maker by setting up American Jared and Rachael. 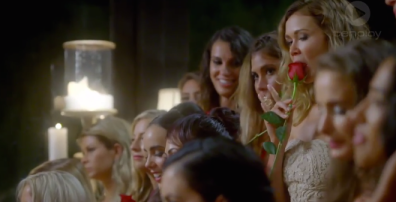 This episode’s date card goes to Keira! And they are playing touch footy with some children. How adorable! Is this how they are going to be around their kids one day, possibly, maybe? He is throwing the game to let her win, even though he is super competitive, that is why you know he really likes her. I hope these two make it work outside of paradise otherwise him seriously falling for her right now is going to bring another televised Jarrod heartbreak that we are just not ready for. The last one was hard enough to deal with.

Simone is super jealous with new girl Rachael flirting with Apollo and asking hypothetically if she asked him on a date would he say yes? Watch out, Simone hears everything and paradise isn’t that big, I wouldn’t want to step on any toes. Even for the god Apollo. I haven’t checked her social media but Simone calling a girl flab just is not going to go down well. I thought all women were about empowerment and body confidence and this gorgeous, slim girl has been named flab. Not cool.

Hello Osher! Looking swish as always, but his presence isn’t for long as he takes Megan away with him. Last time this happened, it was Jake going to meet Megan so all sorts of questions are coming up in paradise. Jake is worried with how unpredictable paradise can be.

Simone and Rachael have a chat about Apollo to figure out their situations, but it quickly turned into Simone pushing Rachael to chat with Jared since she has an interest in him. That isn’t obvious much, Simone is obviously trying to fend off all of the threats between her and Apollo.

Psycho Sim is coming out. Actually it didn’t, she just pushed Rachael and Jared closer together, to go for a romantic walk along the water. The sunset, the peacefulness, it is all so cute, maybe some sparks are flying between the two? Rachael was flirting hard core and went in for a kiss. It is a bit too soon babe. And now she has Leah to watch out for, I hope Rachael can sleep with one eye open.

Later in the evening, Leah and Jared have a one on one chat with each other to sort their heads out. She is jealous that she has competition for him now that Rachael is interested and Leah is finally opening up and sharing her feelings, but it is too little too late. She is trying too keep her back up boy now that the boys have the power. Just another player in paradise.

Meanwhile, everyone is asking Jake about Megan’s situation and yet no one has any idea so why are they stressing him out to overthink everything? No one has a clue and are just trying to make content and push out the episode.

Channel 10 probably would have been sued if Thomas didn’t be on the show longer so shock he is back in paradise to go on a date with Megan. The long hair just isn’t working for the wind that night, I know that struggle. Megan was so unsure for Jakes reaction if she went on the date with Thomas a few days back still wanted to get to know him, and now is her chance away from everyone else and Jake’s initial blow up over this, as we know he is not going to be happy.

Simone and Thomas’ date went so well that they had a kiss while having a swim in the ocean, and now it is going to be super awkward when everything is discussed back in paradise. It was a shock to everyone to see Thomas back as no one gets a second shot here, especially Jake who has no words. He knows something is up and that Megan is ashamed of something. It will be revealed next time, what a cliff hanger.